Ingress Wiki
Register
Don't have an account?
Sign In
Advertisement
in: Items, Other, Gameplay,
and 2 more
English

A storage container that can hold other objects.

is a container that holds other items. They can be used to organize items and operate on them in bulk, most frequently for exchanging large numbers of items between Agents. The Quantum Capsule can also duplicate items.

can hold up to 100 items. Any item, except for Capsules

themselves, can be placed within a Capsule

. The items within, as well as the Capsule

itself, count towards the Agent's inventory cap. Items inside a Capsule

are not included in the item category sums in the Inventory screen.

are listed as Rare, they have a far lower drop rate than Rare Mods. Community studies have estimated the drop rate to be approximately 1 in 4 000 item rolls.

Items remain inside a dropped Capsule

. Other Agents can pick up the Capsule

and acquire the items, which simplifies donating and exchanging gear.

Beware that attempting to pick up a Capsule

with insufficient inventory space will play the "pick up" sound effect, but the Capsule

will remain on the ground. The message "Too many items." will appear on the Agent's Scanner, in red text, similar to hacking a Portal during cooldown or burnout.

also recycles every item it contains, adding the total XM to the Agent's XM tank.

has a unique hexadecimal ID that appear to be non-consecutive. These IDs are useful for identifying a dropped Capsule

, and distinguishing them within an Agent's inventory.

also allow for labels to be placed on them in order to know at a glance what is kept in them.

A storage container that can hold other objects and cause non-Very Rare items to multiply over time.

The Quantum Capsule is a Capsule variant that occasionally duplicates items inside it. It is the rarest item to get from a Hack.

Quantum Capsules duplicate items exactly once per day. The number of items created is proportional to the number stored in the Quantum Capsule.[1] The Quantum Capsule must contain fewer than 100 items and the Agent's inventory must have fewer than 2 000 items.[2] For C.O.R.E. Members the latter number is increased by 500 (along with their inventory limit) for the duration of their membership.

According to analysis from February 2016, Ultra Strikes

(Very Common) had a per-item duplication rate of 5% over four days.[3] Since 26. December 2018, Very Rare items no longer duplicate in Quantum Capsules.[4]

and Quantum Capsules cannot be placed within other Capsules

, they cannot be duplicated.

Originally called the MUFG Capsule, it was a sponsored item bearing the name of Mitsubishi UFJ Financial Group, Inc.[5] The connection was that like its investment-bank patron, it the MUFG Capsule would pay interest in the form of duplicated items.

When initially introduced, the duplication rate was far higher, around 1% per MUFG Capsule per day and did not depend on the rarity of the items inside it. Thus it was a far easier way to acquire Very Rare items such as Flip Cards and AXA Shields than hacking. The drop rate of MUFG Capsules was also much higher, roughly the same as regular Capsules

. This changed around 19. February 2016 when the duplication rates for Rare and Very Rare items were reduced.[3]

Kinetic Capsule runs known Programs to refine XM objects into new or rarer items, and is powered by kinetic energy and distance trekked.

Kinetic Capsule is a unique type of Capsule that crafts items through a combination of XM, Materials (items), and kinetic energy charged by walking a predetermined distance. Level 4+ Agents can claim one Common Kinetic Capsule for free at the Store which is indestructible and reusable.[7]

The maximum distance able to contribute to a Kinetic Capsule is 40km per day. Any distance above 40km walked within 24 hours will still contribute to the Trekker-medal but will not be counted towards Kinetic Capsule Programs. During normal operations, this means that up to five Programs can be completed within the 24 hour period. During events which reduce the distance requirements, more than five Programs can be completed per day.

There are five permanent Programs that produce Very Rare items that can be crafted through the Kinetic Capsule. An Agent can use Resonators

that are (above) the specified level (usually L﻿4+). 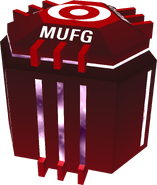