This article is a stub. You can help Ingress Wiki by expanding it.

A Control Field is created in-game when three Portals controlled by the same faction are Linked together in a triangle to collect the primary scoring metric, Mind Units. They are shown on the map as fields of green or blue in accordance with the faction that controls them.

The creation of control fields provides the controlling faction with additional score, while the other faction benefits from disrupting them. Fields can be disrupted by attacking and capturing one or more of the portals whose links form them.

Control fields can range from very small (a few hundred square meters) to very large (conceivably stretching over hundreds of kilometers), depending on the level of the portals involved and players' willingness to travel between portals to link them. Fully upgraded portals (those with eight Level 8 resonators) can link to portals hundreds of kilometers away if a player has the keys for both, allowing large areas of land to be capture quickly.

Creating control fields is a very efficient method of gaining Access Points for leveling up, as the player receives 313 AP for each link created and an additional 1250 AP when a field results from new links.

To create a field, three portals must be linked in a triangle. The 3 portals used are often called Anchors. Portals inside the field can only be linked from portals that are used for the anchors. An anchor portal is always considered outside of the field, but may be covered by another field later.

MU score formula is not known, however, there is correlation between the population under a field, and the amount of population immediately surrounding the anchor portals.

The Following Medals can be earned by creating Control Fields:

Layering Fields is the most efficient way to gain MU. Setting up certain links that might end up in a field is essential to creating layered fields. No link can create more than two fields; one on either side. 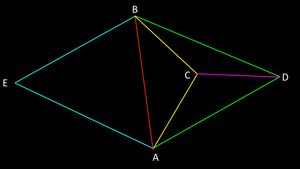 For instance, if the AB link is made last in this image, ΔABE and ΔABD will become fields, but ΔABC will not become a field. The inner most field must be created first. If ΔABC is the first field then it will become two layers deep when ΔABD is created. When CD link is created after ΔABD, ΔBCD and ΔACD will be formed, creating two layers all over ΔABD. ΔABE can be created anytime. 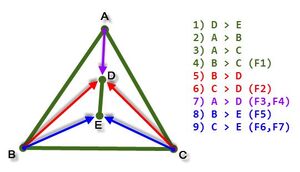 Double Anchor Pyramids Control Field Δ are a popular way to field boulevard portals in a straight line. This example shows one way to field a three point top pyramid. The DE link is created first so that the agent no longer has to move to those portals. The ΔABC outer most field is then created. ΔBCD is created next by pointing the outside portals to the inside. AD link is created next to get the two fields. Finally, ΔBCE is created to get three more fields. 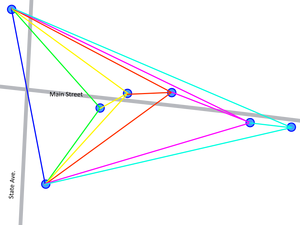 For pyramids with more than 3 top points, first collect from each of the two base points of the pyramid enough Portal Keys to connect to every top point. At the line of portals link them from closest to the base to the farthest. Starting at the second field, link each portal to the top of the previous field. If the agent had up to 8 keys for the line of portals when at the base, they can all be connected while the agent is there so long as they are all connected to only one of the base points. This can greatly decrease the time to field. 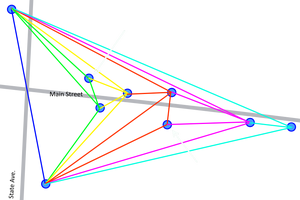 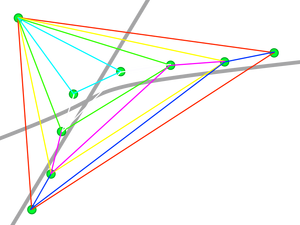 These pyramids take significant time and key inventory. This is better done when the anchor can be well secured (has limited access) or a lot of agents will be protecting it and fielding the other portals. Again, it is built smallest to largest, but the base is being extended out instead of the tip. Each base is connected to the previous and then linked across to create double fields.

A single portal with 3 or more fields covering all 360 degrees around it.

Dai T's lessons for multi-layered fielding cover many setups, including ways to profit from a long row of 8/16/24 portals by only visiting each portal 3 times (without getting as many keys from the base portals).

A lot of agents enjoy creating field art with the Control Fields. They are often done for special events and cross faction.

Retrieved from "https://ingress.fandom.com/wiki/Control_Field?oldid=9169"
Community content is available under CC-BY-SA unless otherwise noted.