(ENL, colloquially known as frogs) is one of the two factions in Ingress, represented green within the Scanner. Contrary to the beliefs of the Resistance

believe that the Shapers have existed since the beginning of mankind and are the reason for mankind's progress from the Stone age into the modern era. The Enlightened

seek to progress mankind along its evolutionary path through art, music, science, and education. They favour progress and believe that the Exotic Matter (XM) could shape the future of humanity and allow it to reach its full potential.[1] The Enlightened

want to embrace the new possibilities that come with the Exotic Matter (XM) and think that they should be made available for everyone along with all knowledge. In their mind Exotic Matter (XM) is the path to epiphany, elevation and enlightenment.[2]
Due to the difference in perspective over the Shapers and their motives, and the appropriate utilisation of Exotic Matter (XM), the Enlightened

exist in a perpetual state of conflict on Earth. 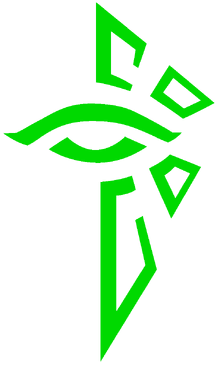 Founded by Roland Jarvis, a sculptor and former member of the Niantic Project. Jarvis was part of the team that created a hacked version of the Scanner to make neutral XM (white colour) turn into Enlightened

All Portals, Links, and Control Field Δ that are under Enlightened

control will appear with glowing green XM in the Scanner. Upgrading Portals, regardless of who owns it, benefits the entire team and makes the opposing faction have to use more gear.