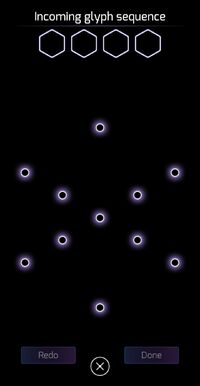 Glyph Hacking, also known as glyphing or glacking[1], is a memorization minigame accessible through a Portal's info card.[2] Agents must successfully trace out certain Glyphs in the given amount of time to acquire additional items and earn bonus AP for each Hack.

In Ingress lore, the Glyph sequences were authored by the Shapers and provide insight into their mentality, motivation, and goals.

To begin the Glyph Hacking minigame, an Agent taps a Portal within their Area of Influence to invoke its info card. Holding the 'Hack' button and swiping to the Glyph-symbol (top left) loads the Glyphs and begins the hack.

The Agent will be shown a sequence of one to five Glyphs, depending on the level of the Portal or Agent, whichever is lower. The Agent must then trace the Glyphs into the 11-dot array one by one, repeating the sequence exactly. If the Agent makes a mistake in retracing the Glyphs, he or she may redo the Glyph by pressing the "Undo" button at the lower left corner.

Each successfully-drawn Glyph causes the Portal to make bonus item rolls and produce more items. If every Glyph is entered correctly before the countdown elapses, the Glyph bonus will be increased further, and a speed bonus proportional to the remaining time will be applied.[2] The Agent then receives bonus items and standard hack items separately.

Glyph hacking is subject to the same cooldown and burnout effects of standard hacks. While completing a Glyph sequence does not guarantee bonus items, nearly all Glyph Hacks will produce bonus items.

Community studies suggest that the composition of bonus items is identical to that of standard hack items and that every 30% of Glyph or speed bonus, rounded up, causes another item roll to be added to the bonus. The rolls are made independently, and the Agent can receive multiple copies of the same Very Rare or sponsored item.

are also given as bonuses, meaning it is possible to obtain more than one Portal Key

Each correctly-entered Glyph gains the Agent 50 AP. If the entire sequence is correctly entered, the speed bonus will be applied to the AP reward. This AP is independent of the 100 AP reward for hacking an enemy Portal.

Tapping the BYPASS button during Glyph Hacking abandons the sequence and resolves identically to a standard hack. If an Agent must rapidly leave the minigame, they are advised to instead tap on a grid point to fail the rest of the sequence and receive credit for any correctly-entered Glyphs.

Immediately after the glyphing screen is shown, the Agent will see the legend "COMMAND CHANNEL OPEN" and will have some time before the Glyph sequence begins. During this time, the Agent can enter specific commands[1][3]. The currently known commands are the following:

Before Ingress version 1.90.1, a hack would not produce a Portal Key

if the Agent was already carrying one for that Portal in his or her inventory. In order to have multiple Portal Keys

of the same Portal, Agents would drop or store their owned Portal Keys

This tedious process was overcome by the MORE Glyph. By entering it in the command channel, the hack has a normal chance of producing a Portal Key

, regardless of the amount of Portal Keys

already owned for that Portal, even if the Glyph sequence was not entered correctly or in time.

Entering the LESS Glyph, on the other hand, specifically requests for a Portal Key

not to be produced. This is useful when Agents do not want a Portal Key

for the specific Portal. This could be due to several reasons. e.g. inventory limit, or the Portal being owned by the enemy and far from the Agent's normal operating area.

Entering SIMPLE command will cause the Glyph sequence to be shown at a slower speed, thus making it easier to memorize and repeat.

On the other hand, the COMPLEX command will generate the opposite effect, and the Glyph sequence will be presented at a faster-than-normal speed. This generates an additional challenge to the Agent but at the benefit of being able to farm faster, or Glyph hack more Portals while travelling on public transport.

The Translator Medal recognizes Agents who have mastered the Shaper Glyphs.

Each Glyph is associated with one or more translations. The translated words will be revealed after the sequence is completed, regardless of the Agent's performance. There are currently 100 Glyphs, with some appearing more often than others.

The Glyph sequences received by hacking a Portal of Level 2 or higher are not random. Instead, a pre-set sequence is randomly selected from a table. Agents who memorize the sequences and their translations can improve their performance while relieving themselves from having to memorize the shapes on the fly.

With one exception, each Glyph is drawn by connecting adjacent nodes, without backtracking. That is to say, the lines that connect two nodes never overlap another node.

Allendorf later explained that he had modified the Ingress Scanner app to tell Niantic's servers that he completed the Hack in -20 seconds.

Niantic's servers converted this to a ratio of -1.0. It then cast the negative 32-bit floating-point number into an unsigned 32-bit integer. Because the twos complement representation of a negative number has each bit set to 1, this returned a speed bonus of the maximum 32-bit unsigned integer value of 2 147 483 647. The server divided this by 1 000 to convert from milliseconds and used it to calculate the item drops.

The bug was quickly patched, and the cheat is no longer possible.

When Glyph Hacking was first introduced, all hack attempts, both Glyph and standard, had a small chance of initiating a HIGH BONUS ENABLED Glyph sequence. Completing the sequence rewarded the Agent with a large number of bonus items while aborting or failing it caused the hack to fail completely and produce nothing.

Although HIGH BONUS ENABLED was mentioned in the official Ingress help pages for a long time, it was removed from the game shortly after its introduction.