The metrics of Ingress are as follows:

Meters: distances are checked in the metric unit of meters
Speed Limit:

Checkpoints are 5 hour MU progress checks for both the global and the Cell level. At every Checkpoint, the fields are assessed for their MU value and added together. They are not added to previous check points. The Checkpoints can be seen in the Intel Tab of the OPS menu. There are 35 Checkpoints for every Cycle where the average MU is taken for the final score.

Cycles, also known as septi-cycles[1], are 175 hour "finish lines" that average the MU from 35 Checkpoints. The score is counted at the Global and Cell level.[2]

The ongoing tally can be seen under the "Intel" tab of the OPS menu. Previous cycle scores can be viewed by tapping "History" at the bottom left corner. In addition, the top 50 Agents from each faction are ranked by their MU control throughout the cycle, which can be seen by tapping "See other agents" under the cell map.

Cycles have no real effect on gameplay, other than acting as a scoreboard.[3] However, in rare cases cell scores at the end of a cycle have been used to determine the outcome of an anomaly, such as during Helios.[1]

Graphs of MU control over a cycle used to score the Helios anomaly.

The top agents of the cycle are ranked.

Exotic Matter or XM is a transdimensional energy discovered by researchers at CERN (Switzerland) who were searching for a so called "God particle". It is a resource collected by the Scanner and drained with most actions made with the Scanner. XM is represented as glowing bluish-white dots throughout the world. XM tends to appear more around areas of high mobile phone usage, such as public transport stops and city centers. XM also appears clustered around a Portal. The scanner stores XM and uses it to perform most actions other than collecting more XM and restoring XM via a Power Cube

. If the XM stored reaches critical levels (below 1%) the scanner will become disabled until sufficient XM has been restored. In addition to being unable to perform any actions that require XM, a disabled scanner may not be able to perform other actions such as viewing Resonators

or Mods. A disabled scanner can still activate a Power Cube

To acquire XM from the ground, the scanner needs to be brought within the action range (40 meters, shown by the orange ring); the XM will be drawn to the scanner and added to the total carried. XM can be collected about every 3 seconds.[Outdated] XM can also be obtained by using Passcodes, Power Cube

and recycling items The XM collected disappears from the game until it naturally regenerates after about 25 minutes.

The bar next to your level shows how much XM you have relative to your total capacity. Capacity increases along with your level. Once you have reached 100%, you cannot pick up any additional XM. 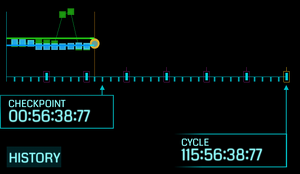 From the Scanner, touch OPS > INTEL to access the Global MU view.

This competition hinges on maintaining control of those Mind Unit (MU) Control Field Δ through key scoring Checkpoints that happen every five hours. Each competition period has a 175 hour duration. If a Control Field Δ is maintained through the Checkpoint time, then those Mind Units (MUs) are added to that faction's running score in that Cell. The faction with the highest average Mind Unit (MU) score at 175 hour Cycle end, wins that Cycle.

The ENL and RES bar charts show the average Mind Units (MUs) scored during the current 175 hour competition Cycle. This score is not the same as the global Mind Unit count shown on the Intel Map, which reflects total Mind Units (MUs) held at that point in time.

Each geographic Cell has a unique codename. For example, the Cell in the image above is identified as AM01-CHARLIE-02. Cell codenames currently cannot be nicknamed by Agents.

The ENL and RES bar charts show the the average Mind Units (MUs) scored during the current 175 hour competition Cycle. This score is an average of the Mind Units (MUs) that are maintained by each faction through the scoring Checkpoints that occur every five hours.

Touching History will show the historical results of Cycles for that particular Cell.

Touch SEE OTHER AGENTS from the regional Cell view to display the top 50 Agents per faction for the current Cycle and Cell.

Touch CELL ACTIVITY to view a list of neighboring Cells that surround the regional Cell in which you are currently located. You can view Cell Activity for nearby Cells, but we do not currently offer an option to search for or view specific Cells.